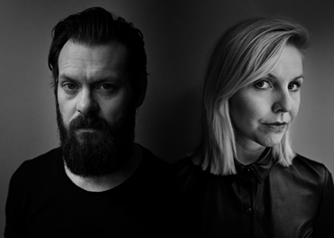 Klara Källström (1984) and Thobias Fäldt (1978) have been working together since 2005 and are based in Sweden. Since 2011, they are the founders of the publishing platform B-B-B-Books. Their works have been exhibited internationally including Bunkier Sztuki in Krakow during Krakow Photomonth Festival, Le Bal (Paris), Photo Saint Germain (Paris), LACMA (Los Angeles), Trafó House of Contemporary Arts (Budapest), Aperture Foundation (New York), Kunstal Charlottenborg (Copenhagen), Hasselblad Centre (Gothenburg) CFF/Center for Photography and Fotografiska (Stockholm). Källström and Fäldt have received the Documentary Award from the Museum of Work in Sweden (2015), Sundsvall Museum’s Art Award (2016), Greenhill Art Award (2014) and Scanpix Photo Prize (2012 and 2006). They have received scholarships from Iaspis: the Swedish Arts and Grants Committee’s International Programme for Visual and Applied Artists for the Artist-in-Residence at Nova Iskra in Belgrade (2016) and from CALQ in Quebec, Canada (2013) and The Royal Academy of Fine Arts in Stockholm for the Artist-in-Residence at La Cité Internationale des Arts in Paris (2017). Källström and Fäldt hold working grants from the Swedish Arts and Grants Committee and The Writers Committee in Sweden.

Grounded in the medium of photography, the work of Klara Källström and Thobias Fäldt focuses on the production of knowledge, exploring media issues, historical narratives and the depiction and perception of political events.
Over the years, Källström and Fäldt have produced a number of works relating to places undergoing paradigmatic changes; they seek to activate historical layers and notions of uncertainty and chance in order to draw attention to the gap between what is visible and what is told.