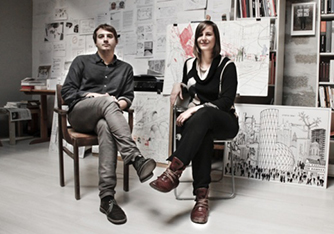 studio ASYNCHROME is a multimedial, multi-disciplinary Think Tank founded 2013 by artists and architects Marleen Leitner and Michael Schitnig. ASYNCHROME focuses on the interfaces between Architecture, Urban Research and Art.The initial position is the assertion, that the utopia has to be understood neither as a failed plan nor as a building task.It rather serves as tool and method to work critically and artistically not doomed to failure, but as a way to change the world.
Recent exhibition participations include the BRUSEUM / Neue Galerie Graz, the Vienna Biennale, the Center for Contemporary Art, the National Museum of Art Architecture and Design Oslo, the Designweek Beijing, the Kunsthaus Graz, the steirischer herbst festival, the House of Architecture Graz, the ART Steiermark in Brussels, the Forum Stadtpark, the the Grazmuseum, the OK Offenes Kulturhaus Linz as well as the Architekturzentrum Vienna in the Museumsquater.
In 2014 has been released their comic-manifesto “Niemandsräume/No mans spaces”, by TU-Graz press with support of the Institute of Contemporary Art Graz/Austria.
Leitner & Schitnig are awarded with the funding prize for fine arts of the city of Graz and they are working scholarship holders for fine arts of the city of Graz and START scholarship holders for architecture and design of the Federal Chancellery of Austria. In 2017 studio ASYNCHROME received the Outstanding Artist Award / Innovative Cultural Work as Part of the ThinkTank Team for the “House of Open Gates” initiated by center for contemporary art, Graz.

The emergence of urban spaces and the growth of cities in particular are dependent on foreign migration. Otherwise cities won´t exist. Trieste as a habour city, as a place of arrival and departure for people and also for goods have a long history. But what are the possibilitys, the plans, the movements for the future? The medium of narrative drawing as a discursive perceptual walk has the possibility of a multi-layered approach.
studio ASYNCHROME dreams of an architecture that is not merely a monument of money, but has its own will. They dream of the feeling of entasis, and not of the dictum of functionality. They dream of an art which does not claim to be eternity, but thereby becomes timeless. They dream of the reference, but also of the referendum. They dream because in the dream we can change the reality a little bit.
​