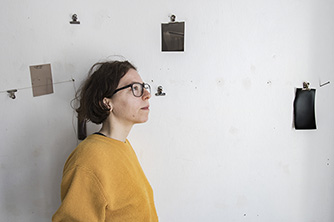 Born in styria in 1981, Ulrike Königshofer visited the “Ortweinschule” – School for arts and crafts in Graz in 2000 and afterwards graduated fine arts at the university for applied arts in Vienna 2005. Since then she is working as a visual artist in Vienna, 2012 she spent some time in Paris, where she got an artist residency at the Cité des arts international and where she started to deal with photography and the idea of similarity in the image. In 2018 she held a artist residency at Terra Nova National Parc in Newfoundland (Canada) to work with silence and how to record something that is not there.
Her works were shown at several exhibitions in and outside of Austria. Solo shows were held at the “Halle für Kunst und Medien” in Graz (“Dinge, die andere Dinge sind”) or at “das weisse haus” in Vienna (“The Backside of Seeing”) amongst others. She build the mirror-based installation “The See Through” at the Projectspace at Kunsthaus Graz in 2013. Her work was awarded several times, most recent with the Artproof Photography Grant of the viennacontemporary Artfair in 2016. The same year she also got the Erste Bank MoreVALUE award that made her realize a solo exhibition at the Austrian Cultural Forum New York as well as a scholarship for fine arts awarded by the austrian state.
Beginning of the year 2017 the “Verlag für Moderne Kunst” published a new monograph of hers with the title “On Perception”.

My work of the last years puts a focus on human perception, which is the „point zero“ to deal with the world and to have knowledge about it. Every information we can get about anything always needs to pass our senses, be it through seeing or hearing. But perception is not like a transparent window to the world, it is also a filter that interprets what it sees. It always takes a point of view. Merleau-Ponty wrote “I see the next-door house from a certain angle, but it would be seen differently from the right bank of the Seine, or from the inside, or again from an airplane: the house itself is none of these appearances […] it is the house seen from nowhere”. Therefore, an objective and neutral view would be observation without observation.
For my residency in Triest I will work on the shift between an objective view and what our eyes make us see – and how those perspectives are related to each other – on the example of the look of the sky.

Interlocutors: to be defined