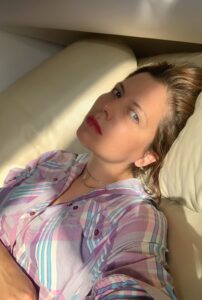 Anaïs Horn, born in Graz, Austria, lives and works in Paris and Vienna. In her artistic practice she often interweaves literature/text and photography/video/drawing, exploring moments of intimacy with a special interest in topics such as liminality and coming-of-age.
She observes people and their spaces, gently crossing borders, opening up the private and making intimacy a sensual experience. In the process, she investigates time, memories, transience, the body and its traces, the cautious intrusion of privacy, and the aesthetics of reality and fugacity.

Her images take shape – on different surfaces, haptics and into objects – often assembling into spatial installations, that leave the viewers to resonate freely and to subjectively weave loose threads.
With a background in literature and linguistics and a degree in communication design, she graduated from Friedl Kubelka School for Fine Art Photography in 2014. She has been awarded several scholarships and residencies, e.g. at the Cité Internationale des Arts, Paris (2017–2018 and 2021), Plovdiv, Cultural Capital of Europe 2019, the ISCP New York (2020, 2022) and AiR Trieste, Trieste (2021).
The artist‘s book is an important medium for her work: her photo book  Fading was published by DCV, Berlin, in 2021. In 2020 her artist’s books Je suis malheureuse et heureuse and How do you feel about “Lou”? (in collaboration with Eilert Asmervik) were published by META/BOOKS, Amsterdam.

Anaïs Horn dedicates her work to Charlotte of Belgium and Mexico. The educated, beautiful and unusually open-minded Princess of Belgium spent several years in Miramare after her wedding to Maximilian of Austria, before moving to Mexico when he became emperor in 1864 – and when their tragic story started to unfold. She was diagnosed mentally ill at the age of 26 – haunted by paranoia and despair, seemingly due to their hopeless situation and suffering from a lack of physical love and unfulfilled motherhood. After the execution of her husband in 1867 she lived 50 more years in isolation. Horn’s research is based on her letters to Maximilian (“Vor Sehnsucht nach dir vergehend“: the private correspondence between Maximilian of Mexico and his wife Charlotte) – interweaving and juxtaposing text and photography, involving contemporary visual approaches such as spy and surveillance cameras – referring to Charlottes state of mind, her anxieties and depressions. On the other hand Horn is exploring the secret memories of the rooms, the furniture and the objects in the castle of Miramare and the Castelletto, where the young couple used to spend their first years together. The remembrance of the space, haunted emotions – still omnipresent and resonating in the stage-like rooms – and the psychological dimension, the uncanny of the past – and it’s translation into the present – the presence of the absent, inscribed in the space, that might appear as ghostly matter in mirrors, reflections, dead angles and blurs.