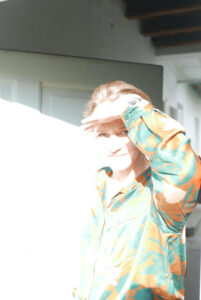 Katharina Copony is an independent filmmaker living in Berlin and Vienna. She studied visual media art at the University of Applied Arts in Vienna with Peter Weibel. With a background in video art and photography, she nowadays makes documentary films, which are presented internationally, e.g. Arsenal – Institute for Film and Media Art Berlin and the Anthology Film Archives New York as well as broadcast on television. She received prestigious awards, e.g. from Vienna International Film festival, ARTE Documentary Film Award and Best Film in Jeonju IIFF Korea. She was Artist-in-Residence in Moriya (JPN), Rome, London, and Sarajevo. As a script supervisor she participated in several award-winning feature films (i.a. Barbara Albert, Valeska Grisebach, Jessica Hausner). She is a lecturer at the University of the Arts in Berlin. In December 2019 the Filmarchive Austria presented a retrospective of her work.

“I’m interested in the relationship of the audible to the visible, of inner to outer. What lies behind, above, beneath the images? The sound can support or contradict the image. And it can also convey something that goes far beyond the image. Between this presence and absence, the poetry of cinema occurs.“

Accademia della Follia is rehearsing in one of the old pavilions of Parco San Giovanni in Trieste. Every morning from Monday to Friday the free theater group meets here, open to all.

In the early 1970s the Italian psychiatrist Franco Basaglia starts to radically reform the psychiatric hospital San Giovanni which finally leads to its closure, thus initiating a far-reaching change in psychiatry. Basaglia is convinced that “a therapeutic relationship is only possible with a free mentally ill person”. He invites artists to work together with the former patients. The whole city and its inhabitants are involved, concerts are performed, legendary parties are celebrated, open mental health centers are founded and work collectives are created in which the patients are paid for their labor.

In the early 1980s, the Counseling Center for Mental Health and Social Issues is established in Graz as one of the first social-psychiatric centers in Austria. Its founders are strongly oriented towards the “Modello Triestino”. One of them is my mother. Following up on my earlier film Kanegra (2004), which portrays four clients of this counseling center during a trip to Croatia, I take up this track again.

What happened to the ideas of Basaglia and which effects do they have today?

Unstable Intensities presents the works realised by independent filmmaker Katharina Copony and visual artist Anaïs Horn as part of the 2021-22 AiR Trieste residency program, supported by the Cultural Department of Land Steiermark (A). Curated by Francesca Lazzarini, the exhibition opens in the spaces of MLZ and Wiener Art Foundation, Trieste, on 18 June at 6.30 pm and will run until 10th September 2022.

Katharina Copony’s residency has been articulated around specific questions: What has become of the ideas by the Italian psychiatrist Franco Basaglia? What significance and impact do they still have today? Interested for long time in the world of psychiatry and in the radical thought that redefined the concept of care between the 60s and 70s, Copony started her research from the San Giovanni Park, where Basaglia became director of the Psychiatric Hospital in 1971. Under his leadership, the park was the epicenter of a change that, in less than a decade, spreads from the Trieste hospital to the entire national territory, resulting in the approval of a law that sanctioned the closure of asylums and a structural reform in psychiatry. Even today, the park is the heart of a system that pantxo ramas, head of the Documentation Center, defines as an ecology of care: in line with Basaglia’s thinking, which believes that healing cannot take place within the walls of the institution but only in the alive of the social fabric – and that by doing so society itself can be cured -, the Trieste Model is composed of an intertwining of relationships, experiences and realities that branch off from the park to the city and beyond. Rather than adopting a documentary approach, Copony has embraced the ideas underlying this ecology. She immersed herself in it, weaving a series of relationships with some of the realities and subjectivities that compose it. The publication presented in the exhibition, Chi non crede ai miracoli non è un realista, reflects this experience, giving space to the many voices that the artist met in person or through books and historical documents. By juxtaposing images taken during the residency with archive photos, excerpts of conversations, poems, and texts created for the occasion, the booklet let emerges the intensity of
a research that Copony considers as the starting point for a film to come.

To be presented in the exhibition is the video the wind, the wind (2022) resulted from the collaboration with the Accademia della Follia – back then directed by Francesca Varsori – and the radio broadcast MedMax by Radio Fragola, curated by Guillermo Gianpietro. Maximilian Rosani, star of the radio show, and Sarah Taylor, choreographer of the Academy, are the protagonists of the video performance realized thanks to the participation of the musicians Maurizio Goina and Pietro Polotti, of the School of Music and New Technologies of the G. Tartini conservatory in Trieste, who have made available the EGGS, a system of sonification of gestures they invented. Connected to the EGGS sensors, the two performers enact the interaction between the bora, the typical Trieste wind, and the materiality of the city – billboards, masts and boat yards, metal structures and scaffolding. By interacting, their movements give life to a changing and unpredictable rhythm, characterized by shocks, suspensions, slips, interruptions, impulses and silences, exposing the viewer to an unstable intensity, captivating and disturbing at the same time.