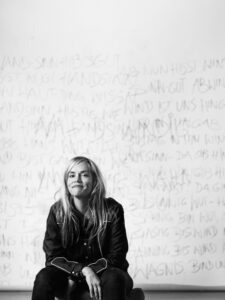 Natascha Gangl, born in 1986 in Bad Radkersburg, Austria, studied Philosophy at the University of Vienna and Playwriting at DRAMA FORUM Graz. She publishes since 2006 and centered her work and life “in the in-between” of Austria, Spain and México. She assisted and edited numerous texts for Christoph Schlingensief. She mainly writes theater texts, experimental prose and essays, researching language in all aggregate states: written, drawn, spoken, performed – on theater stages, in concert and exhibition spaces, in radio formats, in books, on vinyl. She deals with the tonal quality of language, the rearrangment of meaning, playing with notations, using techniques such as montage, overwriting and anagram. Her works have been awarded numerous scholarships and prizes, a.o. the Ö1 Prize for the Best Original Radio Play, the literature scholarship of the province of Styria, the Heimrad-Bäcker Förder-Prize, the dramatics scholarship of the Litera Mechana, and the residence scholarship of the Literary Colloquium Berlin. She has presented her works on stages such as the Greek National Opera Athens, Teatros Canal Madrid, Schauspielhaus Wien, Volkstheater Wien, Werk X Wien, Staatstheater Mainz, ROXY Basel, Theater Winkelwiese Zürich, Festivals such as Wien Modern, steirischer herbst, Dramatiker:innen Festival Graz, moers Festival, Elevate Festival, Jazz Festival Saalfelden, do-audible Galicia, in exhibition spaces such as MUPO Oaxaca or the Institute for Modern Art, Nuremberg and on the airwaves, among others, on Ö1, Deutschlandradio and SWR.

With a particular interest in the connecting lines between Mexico and Europe, I want to explore a certain historical chapter: when Maximilian created the Miramare Castle in Trieste and planned to be “Emperor of Mexico”, the process of “creating a castle”, and the wild imagination of a yet unseen Empire. The portraits of Maximilian, as the almost divine creator of this wondrous Miramare-world, are starting points to investigate an urge to create which points to the absurd, the surreal, between humanistic utopia and megalomania, a show-off of a “will to form”, to impose forms. The disconnection of intention and acts, the propaganda, the act of placing rigid forms on living structures, superimposing images on images, dominating projections with projections – I want to observe where this colonialism fails, disintegrates, and what new narratives can emerge by digging into layers of history, reading between the lines, taking a close look at Maximilian’s self-written poems, bringing counter-narratives from Mexico back to Europe, looking for nuances that may question conclusions. During the residency in Trieste I will use tools like field-recording and graphic notations to create a hybrid-performance text between essay and libretto.

The time in Triest I will use as well to collect field-recordings, voices and develop graphic notations for this language and sound-pieces.